CROSS-SECTORAL COOPERATION AS A TOOL TO INCREASE YOUTH EMPLOYABILITY 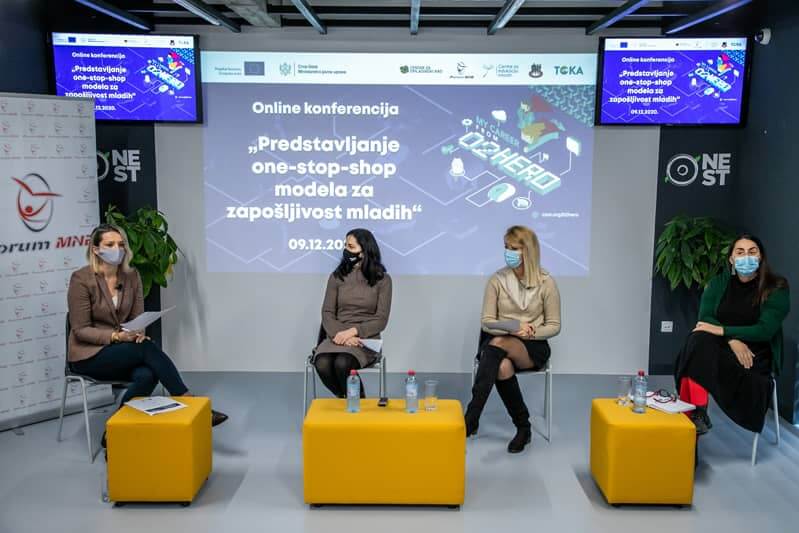 The first public event within the project was opened by the executive director of Forum MNE Elvira Hadzibegovic Bubanja, who pointed out that only active citizens who contribute to the development of society will make it just and peaceful, thus emphasising the vision of the organisation.

Project manager Jelena Fustic explained that one-stop-shop model represents the model which facilitates the transition of young people from the education process to entering the labour market, offering the whole set of services in one place.

This model offers education to young people in the field of digital, soft or essential skills, entrepreneurship, as well as carrier counselling and networking with employers.

„The goal was to create a model that will be adapted primarily to the needs of young people, but also employers, civil society organisations and relevant institutions. The target group, apart from the civil society organisations which will implement the model, is NEET population from 17 to 30 years old, which represents young people who are currently unemployed and are not in the education process. Fifty young people will be directly involved in the project“, Ms Fustic emphasised.

According to her, young people who will participate in the program will be provided with all conditions for participation, such as computers which will be needed when it comes to the development of digital skills.

„In order to create the model that covers all the aforementioned, we created in the project multi-sectorial national group involving the representatives of the civil society organisations, competent institutions, small and medium sized enterprises, IT sectors and young people“, Fustic explained.

She said that for the needs of the project DeFacto Consultancy Agency had conducted research with a goal to define needs of NEET grouping of young people, their professional and social competences necessary to enable 4.0 industrial revolution, requirements of key actors in the process of the market inclusion of young people as well as capacities of the OCD for the implementation of one-stop-shop model.

The representative of DeFacto Consultancy agency, Stevan Kandic, said that 131 persons from NEET population and over 30 IT companies and small and medium sized enterprises and 40 organisations of civil society had been involved in research.

The research showed that 40 present of the NEET population justifies their unemployment with the fact that they cannot find a job that suits their wishes or requirements, while a much smaller number of them believe that it is due to a certain type of discrimination or lack of adequate skills,” said Kandic.

On the other hand, as he added, representatives of IT companies point out the lack of skills and self-confidence among young people.

„Through research we saw that young people highlight the significance of formal education to a great extent, while civil society organisations and representatives of IT companies point out that formal education offers a ticket for the market game and that it all depends on other skills acquired outside of the formal education process“, Kandic pointed out.

The representative of Oykos Development and the member of the project working group, Filip Andjelic, told that it is very important for the employers that the person they hire is proactive for any position, and that „the mentality and the motivation of a person“ is also very important.

„Proactivity is something that should be the major goal of the program for digital skills, in addition to specific knowledge and skills we need to pass on to them. We have to enable young people to change the way they see education“, Andjelic said.

He explained that within the program for digital skills young people will improve their knowledge of digital literacy and design, while at the advanced level the accent will be on the programming, as well.

Dimitrij Jovicevic said that the soft skills program will be designed in a way that all participants in the program will have an opportunity to develop knowledge, skills and competences in specific areas through three trainings.

„Young people will have an opportunity to develop both verbal and non-verbal communication skills in business and less business environment. They will be given a chance to learn how to function in teamwork“, Jovicevic stated.

The representative of the Union of young entrepreneurs of Montenegro, Uros Bulatovic, said that young people will learn how to generate ideas within the IT entrepreneurship program.

„It is very important that young people know how to recognise ideas which are sustainable and cost-effective and possible to implement on the specific market. We will also teach them the basics of marketing“, Bulatovic pointed out.

He said that the goal of all workshops is not that someone becomes completely ready to run a company, nor is that possible to expect, „ but it would be enough to change their way of thinking“.

„The goal of the workshop is to motivate and inspire young people to be entrepreneurs and to encourage them to further develop“, Bulatovic added.

The representative of the Employment Agency of Montenegro, Jevrosima Pejovic, within the panel Multi-sectorial cooperation in encouraging employment of youth said that the current situation is challenging when it comes to employment, stating that the Forum MNE project is a great opportunity for employment of young people from NEET population.

“The NEET population is characterized by the fact that after leaving the education system, they did not enter any other type of training, and they are not employed. And then they are not recognized in the standard procedures of the system itself and remain under the radar. It is very important to deal with that population, to target them, to help them integrate, to empower them so that they would be the pillars of our society”, Pejovic pointed out.

She assessed that the lack of experience and practical knowledge are major challenges young people face with during the process of employment.

The representative of the Montenegrin Employers Federation, Marina Jovanovic, said that digitalization entered the big door during the coronavirus epidemic, stating that companies that do not follow this rate will lag far behind their competition.

“In order for an employer to send an employee home, he must be sure that he has digital skills with which he can do the job. I think that the time will come when employers will organize more trainings for their employees “, Jovanovic stated.

The representative of the ADP organization Zid, Sanda Rakocevic, said that they realized through work that there are more and younger people who want to create a job in accordance with their needs, stating that they need support and understanding for that.

She said that she hopes that the Law on labour practice will be taken into consideration more in the following period.

Hadzibegovic Bubanja concluded the first panel by emphasizing the significance of lifelong learning and a multi-sectorial approach to youth employability, especially the important role of civil society organizations.

The conference enabled a participatory process for the participants, and in the second part of the conference participants worked on adapting the model to the circumstances in Montenegro, and checked how applicable the model is to our context. An advanced one-stop shop model has been created.

The conference is part of a regional project entitled “My career from zero to hero- Strengthening networks of Western Balkan CSOs to implement one-stop-shop youth employability model for future jobs of 4.0. digital revolution”, implemented in Montenegro by Forum MNE in cooperation with the Centre for Youth Work (Serbia), Centre for Youth Education – CEM (BiH), TOKA (Kosovo 1244/99), Qendrat Youth for Social Changes – YSC (Albania), with financial support from the European Union and  implementation of the project is supported in each country by: Montenegro – Ministry of Public Administration of the Republic of Montenegro; Serbia – Swiss government through project “Education to Employment – E2E“ which on behalf of the Government of the Republic of Serbia, is implemented by Social Inclusion and Poverty Unit (SIPRU)